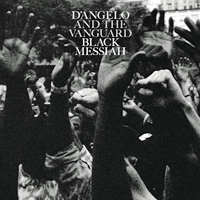 D’Angelo and The Vanguard
Black Messiah, 2014

What a special record this is. Set aside for a moment the idea that any album could possibly be worth a 14-year wait — an extreme posture from which to evaluate success or failure. Consider Black Messiah instead for what it rightly is: a worthy successor to a previous masterpiece, D’Angelo’s second album, Voodoo (itself a departure from his Brown Sugar debut). The man’s body of work to-date is bulletproof, and Messiah continues in the tradition of previous recordings by paying homage to his influences while expanding on them in equal measure. Early reviews pegging the album as a mere continuation of the Voodoo aesthetic must have been written by critics who need to listen to Voodoo again; where that album was precise, calculated, in thrall to minimalist flourish, Messiah feels warm and expansive, live-band “tossed off” despite the long delay. Note this shift on “Till It’s Done,” a living study in the art of playing around the pocket. However this recording came to life — either through a band playing live off-time, recorded in a single take; or one man alone, multi-tracking himself to glory — the end product is anything but contained. This is music as energy, light, meditation, mediation, active culture: something that existed before us and will outlive us too. The shadows of Sly, Marvin and Prince may continue to haunt his work, but it’s the ghost of D’Angelo himself that looms largest. Turns out he was here the whole time.