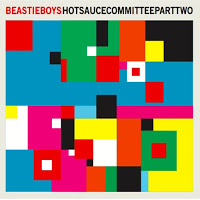 Look, it’s the Beastie Boys, which means for the most part the rhymes here are a solid B. You know that going in, you deal with it. Occasionally on Hot Sauce Committee Part Two, the group’s final album, you hear a line that makes you want to hit rewind — and usually it’s Ad-Rock — but for the most part we’re dealing with the typical off-time brags and boasts here. But that production, man. Holy shit, is this album underrated. Handling behind-the-board duties themselves, the Boys found a way to successfully update their sound for the 21st century: keyboards that crunch and slip out of meter, samples that enter the bloodstream, mics that distort without warning and killer guest appearances from Nas and Santigold. And yet after decades as hip-hop royalty with a commercial track record, nobody paid attention when the album came out. Nobody. Of course the public spoke up when MCA passed a year later, but Hot Sauce remains the least-respected record in the band’s storied career. Long burn the fire; reappraisal is due.