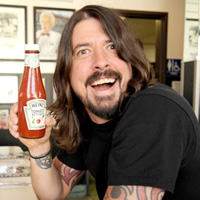 Dave Grohl: your new music sucks, dude! You’re in classic-rock hell now: too much actual singing, too many boring ‘70s weak-ass riffs. The Colour and the Shape still holds up, man. I know, because I listened to it this week right after streaming the new one, Sonic Highways, which … the less said about that title (or album art) the better. Tom Petty’s latest is named Hypnotic Eye, for crying out loud — it’s like you guys switched bodies. Anyway, there was a stretch of time after Nirvana in the 90s — a span of several years in fact — where you ruled as a power-pop songwriter. It was like the perfect blend of kind-of-still-grunge-but-cleaner and kind-of-moving-into-radio-pop-but-not-quite-there-just-yet. And then the same year as Colour, you flipped the script and scored a Paul Schrader indie flick, based on a book by Elmore Leonard. I mean: that’s pretty edgy, dude! And you wrote a great song for that movie, a song which almost no one knows but I’m lucky to have stumbled across in my dorm room c. 1999 thanks to Napster. “How Do You Do” is everything that used to be good about Foo Fighters all in one song, and it proves once and for all that you were what was good about Foo Fighters because you recorded it on your own. It’s catchy, it’s high-energy, the drums kill and like the best pop songs — from The Beatles to yep, Nirvana — it never wears out its welcome. In Your Honor, I’m playing this one on loop today. Everyone still likes you here — how could we not?, you’re our Dave Grohl, the only one we’ve got! — and we’ll keep rooting for you until you decide to call it a day. But seriously, dude. Sonic Highways?

Like Loading...
Tagged Dave Grohl, Elmore Leonard, Foo Fighters, How Do You Do, Hypnotic Eye, In Your Honor, Nirvana, Paul Schrader, Sonic Highways, The Beatles, The Colour and the Shape, Tom Petty, Touch